All posts in “Uncategorized”

October 30, 2014 / Comments Off on Videographer Training / Posted in: Uncategorized

Welcome to the workflow training for spotlightME.tv videographers. Here you'll find sets of tutorials that describe how to accomplish a specific task. The workflow is organized into several groups which help lead to the desired result of successfully uploading your game-film to the spotlightME.tv video library and getting paid for your work.

HOW MUCH OF THE GAME SHOULD YOU RECORD?
Record the entire game. Even when your student-athlete is not in. When college coaches contact a player for game film, they will invariably ask for highlights as well as game film. If you do not have game film, it makes it that much harder for a coach to evaluate your player. Furthermore, when you do have game film, you can easily use it as a calling card to reach coaches who may not have been able to attend any of your games. Although we record the entire game, it is ok to pause recording during time-outs or when it appears there will be a brief interruption in play such as when basketball players are lining up for foul shots. This will reduce your file sizes and save hard drive space.

A compact digital camera with image stabilization will do the trick. Image source: Walmart.com

make use of their ipods, ipads, and cell phones to get clips at games. Although I do not recommend using these items to record games, if that is what you have access to, by all means, press record.

WHERE SHOULD I SIT AT WHILE RECORDING GAMES?
The ideal position for filming games would be in the center of play perched high in the bleachers. If there are no bleachers available, find a spot in the center of play where you will not have any obstructions in front of you. It may be a little difficult to get on the football fields or soccer fields due to their layouts. At times, your view may be obstructed. Record anyways. You can make edits to your footage later.

IS THERE ANY ADDITIONAL EQUIPMENT ITEMS THAT I CAN USE TO MAKE MY VIDEOS BETTER?
There are several steps that you can take to improve the quality of your videos. Along with the camera investment, you should also make sure to purchase a sturdy tripod. Tripods are simple to use and will help keep your video steady. When you utilize a tripod, you can also spend more time focusing on the game and not on how wobbly your body becomes while holding the camera. Steady video goes a long way when college coaches and players are reviewing film. In my own experience, when I am watching video, I do not spend a lot of time watching shaky footage.

You will also want to buy extra batteries, extra media cards, and a long extension cable. I have been on assignment on a couple of occasions where my batteries died and I needed to plug my camera in to finish the job. It is better to record games using power from an outlet than to just rely on your battery. By utilizing the power outlets, you will preserve your batteries for the times when you do not have direct access to electricity. The batteries on camcorders have a life cycle. As you use them over time they will not retain a charge. You will also want to make sure that you pack extra media cards. Although many camcorder hard drives are large enough to film entire seasons, you may want to have the extra cards in the event that you may run out of space. The cards can range from $10-$120 depending on how much space you want. A 32GB SDHC card runs from $15-$45 and will cover quite a few games.

An external hard drive will save space on your computer if you use it exclusively for game recordings. Image source: Walmart.com

Record your Game
Sit in a high spot near the center of play. If you cannot sit in the bleachers. Find a spot in the front whereby you will not have many obstructions.
***It’s not necessary to record during time outs and other game delays such as a loose ball out of bounds. You can save yourself quite a bit of hard drive space.

If you need help with any of the above steps. Please do not hesitate to contact Mauryo, Kirk, or Kevin. They don’t mind lending a helping hand.

After downloading the Aunsoft Video Conversion Software mentioned in the video, forward Mauryo a copy of the invoice and you will be reimbursed for your purchase. Mauryo@spotlightme.tv

NOTE* You do not have to use the “visitor” label during regular high school games.  The home team and visitors teams are used as labels for tournaments.

Step 3: Upload to the Videographer Dropbox

You will be “invited” to view/edit the spotlightME.tv videographer dropbox.  If you have not received the invitation yet, please contact M@uryo.

Locate the schools folder for the game you covered and upload your completed video to that folder.

Once the upload has been confirmed by M@uryo then the payment for the work will be processed.

How do you know if you are doing a good job?

At spotlightME.tv, we treat our “game-film” as if the President of the United States is going to watch our video.  Here are some tips to utilize for your filming. 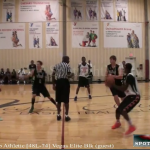 Filming from the sideline

Always utilize a tripod.  Utilizing a tripod is great because you do not have to handhold a camera which reduces the overall quality of our production.  Exception. If you are in a particular game where the crowd is overly rambunctious and it is best to hold the camera, then by all means hold the camera.  Here’s an example of when holding the camera is acceptable.  Throughout the game, the couple sitting in front of the videographer remained seated, until the game went into overtime.  At that point, they stood up and blocked the videographers camera view of the floor.  So in this case, the videographer elected to handhold the camera.  WATCH

Courtside filming.  There are times where we will film games and we are required to be right on the sideline of the court.  Be aware that there will be times when the officials will block your view.  It is ok to ask them before the game to not stand directly in front of the cameras.

When filming in gyms with bleachers.  Sit on the visitors side, in the center of the court, and with a good vantage point about halfway or near the top of bleachers.    If you are utilizing a regular camera, zoom out so that you can cover at least 3/4 of one half of the court.  By filming a good portion of the field, you reduce the number of times that you have to move the camera and you also assist the coaches when they are watching “game-film” because they get an opportunity to watch the entire play develop. 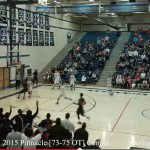 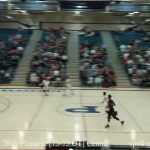 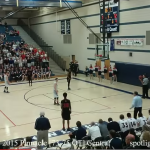 Timeliness.  Show up to games at least 15-30 minutes before the scheduled time.  This will give you time to get a good spot to film the game, set up your tripod, plug in your power cable, and will also afford you an opportunity to use the restroom or patronize the concession stand.

If you record a game or a particular clip of a game that is particularly highlight worthy, let Mauryo know immediately.

If there is confusion over a call and the refs have to huddle up on the court or at the scoring table, continue recording.

If a fight breaks out, continue recording and do not intervene in the fights.  We are not a security force.  Although many of us live in concealed carry states, it is illegal to carry a firearm onto school grounds.  Do not bring firearms onto school grounds.

Children.  From time-to-time, there will be children acting like billie goats.  Parents sometimes allow their kids to treat bleachers as if it is a playground.  If children are in close vicinity to you and are disrupting your abilities to perform your duties with their jumping and bouncing, it is ok to ask the kids to return to their parents or stop running and jumping.

Power cords.  Take a 150 ft drop cord to the game and plug your cameras in while filming.  If you only utilize the batteries, over time they will wear out and will not give a “true” reading of how much time is remaining for you to record.  As an example, you may have a battery charging all night and so after you insert it into your camera it will read 100% on the display.  Later, you’ll be shocked to learn that after 10 minutes of recording, your camera indicates that you only have 5 minutes remaining to record.

If you are using the battery only, you must reduce the brightness to 60% or below to conserve the battery life and ensure that you will be able to finish filming your game.

Thank you for doing your personal best.  We have the best clients in the world and when people see us working, they want to know who we are and how they can get the film.  Please let them know about spotlightME.tv and provide them with M@uryo’s contact information.

We are ambassadors for fans, parents, athletes, and college coaches.  We should conduct ourselves and our business as if a players scholarship opportunities are on the line.  More importantly, we are documenting history, once a game is over, that game will never be played again and the only ones who have the game film, more often than not, is spotlightME.tv.

If you have any questions, please do not hesitate to call M@uryo or Kirk.