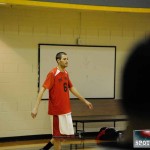 If you are like me, you drive past high schools on any Sunday afternoon and you think nothing about the school.  You may glance over if you see a pick up game of baseball or maybe if there are some people walking the tracks.  Maybe, just maybe, you may glance over.  But for the most part, those moments of attention are swift and short lived.  On this particular Sunday, I had a purpose for being at the high school gym.  My friend Kyle Borst plays on a men’s basketball league and I asked if I could watch a game.  “Of course!” he exclaimed. ” You will probably be one of a few fans in the audience.  The guys could use it.”  He gave me the location, and I thought twice about my decision.  “Peoria High School and we play at 11 on Sunday.”  Well, I already committed so I smiled and said you can count on it.  “I will be there.”

You know me, I showed up with my son Maliq in tow and fully armed with my camera bag.  If I am gonna be there, I might as well take pictures.

Arriving in the parking lot, it was kind of easy to tell where the basketball gym was.  All the cars were congregated in one spot.  “Yep, that must be the gym.”  We exited our vehicle and made our way to the gym doors.  Upon opening the doors, I have the thought, when does the dream stop?

Upon entering the gym, I heard the sounds of two teams on the court dueling it out.  The recognizable skreech of sneakers on the hardwood.  The resonating sound of the ref’s whistle.  The smell of hard work in the air.  This is the right place.

“Dre”, I said as I recognized one of Kyle’s best friends, who also plays for the league.  He dons a red jersey with black lettering.  The lettering indicating his coveted number 6 and the team name “The Finest”.  The game that was underway as we entered the building concluded.  The gladiators exited the court and the up and coming players rose up off the benches and began their stretching and warm-up routine.  As they stretched and settled into the gym, I snapped pics so that I can get the settings the way I want them.  One of the departing Gladiators asks, “Hey, did you get that technical?” I replied that I had not but I also wasn’t sure what was going on.  He indicated that the players cannot touch the rim due to a school rule in place to help prevent injuries.  So he received a technical foul call because his hand brushed the rim.  A small wound to the scoreboard, but to the Gladiator, it was just part of the game. 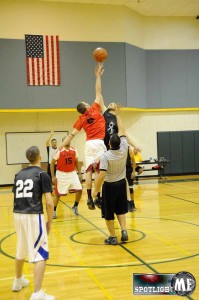 Warmups are over and the refs signal that it’s time to get the game started.  As the players assemble at center court you can tell that they have been feeling each other out.  Watching the warm ups and trying to determine each others coveted “shooter” while also sizing up the big players.  This is going to be interesting.  Kyle and a player from the black team jump for the ball and the game is under way.

The game resembles many high school basketball games.  A few steps up from a pickup game at your nearby fitness gym and a step below an NBA team tryout.  As I watched the game unfold, it became clear that every player was there for a different reason.  Although I did not take the time to interview each player, I could tell.  Some of them did not look like they were in the best of shape, so maybe they became part of the team so that they could lose a bit of weight while embarking in an activity that they enjoyed.  Some of them looked like they could jump through the roof and maybe this was an opportunity for them to prove their bravado on the court.  One of the players, I called him “coach”, asked if I was from the city paper.  When I replied no, he said “I was hoping that you would make us famous!”  We both laughed and I passed him my business card.  From what I could see, he was the oldest gentleman on the court.  I am not sure what led him to this particular gym at this particular time, but he was a nice gentleman and I hope he gets out of the gym exactly what he puts in.

I thoroughly enjoyed shooting pics during this game.  It was great watching the players have the same passion in their eyes that I see of high school basketball players.  Their fan base consisted of a few spouses, girlfriends, a supportive mom or two, and some happy kids playing with their gadgets or playing tag with each other.  I was happy to be included in that fan base on this day. 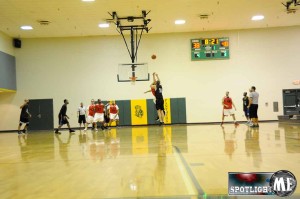 When does the dream stop?

This game did not end well though.  After a few misdirected plays and a tinge of testosterone, the refs were forced to call the game with 1:27 seconds left in play.  The red team had defeated the black team by technicality.  But for all intensive purposes, the black team was loosing by the numbers.

The ref called the game and I grabbed Kyle and his mom and ushered them onto the court for a picture.  I then packed my bags and started to head out.  One of the players came over to shake my hand.  He shook my hand with a familiarity and I asked him, can you remind me your name again to which he replied “Bud!”  Oh yeah, I said.  I remember now.  That is Kyle’s roommate.   Wait a second, let’s go back in the gym and take a few more pictures.  We reentered the gym and I corralled the players for a group photo.  A group photo that I hope will last them a lifetime.  Afterwards I bid farewell and bounced with Maliq.

What happened next was a little unexpected but was inline with what I would have liked to have happened.  Right after the game, I approached a player from the black team and asked him to contact me because I took some pretty good photos and wanted to make sure that he and his teammates got to see them.  You better believe that he gave me a call the next day.  “Hi this is James, we met yesterday at Peoria HS”.  “Oh yeah”, I said, “you’re the point guard with the beard.”  And so began our conversation.  It turns out that James is a fellow Marine and hails from Louisiana.  He’s an IT type of guy and plays on the leagues for fun.  He also let me know that there are leagues that are playing on the Air Force base and some of the teams travel to play in different regions and states.  This next part is what I found most interesting.  He said that in the 2 years that he has been playing in the league, he has never seen one photographer at any of the games.

You see, the dream to pursue excellence does not end when a player graduates high school or even after they graduate college.  The dream does not end for those who choose not to go to college.  As long as there are gyms and leagues the dreams will continue to live on.  They live on after hours when everyone else is off doing the things that are important to them on Sunday afternoons.  In this gym, it was important for some players to win the game.  For some players it was important to know that their family and friends took the time out of the day to come watch them play.  For others, getting in shape so they can bring their sexy back was important.  Whatever the dream and whatever the pursuit, the gym is what brought them together.  I have often advised Maliq that at some point this game will end for you.  At some point, whether you play beyond high school or beyond college, at some point this game will end.  But looking at the players on the court this day, I may have to revisit my previous statement.  I could just be dead wrong.

I am grateful that my friend invited me to be there for that part of his journey. 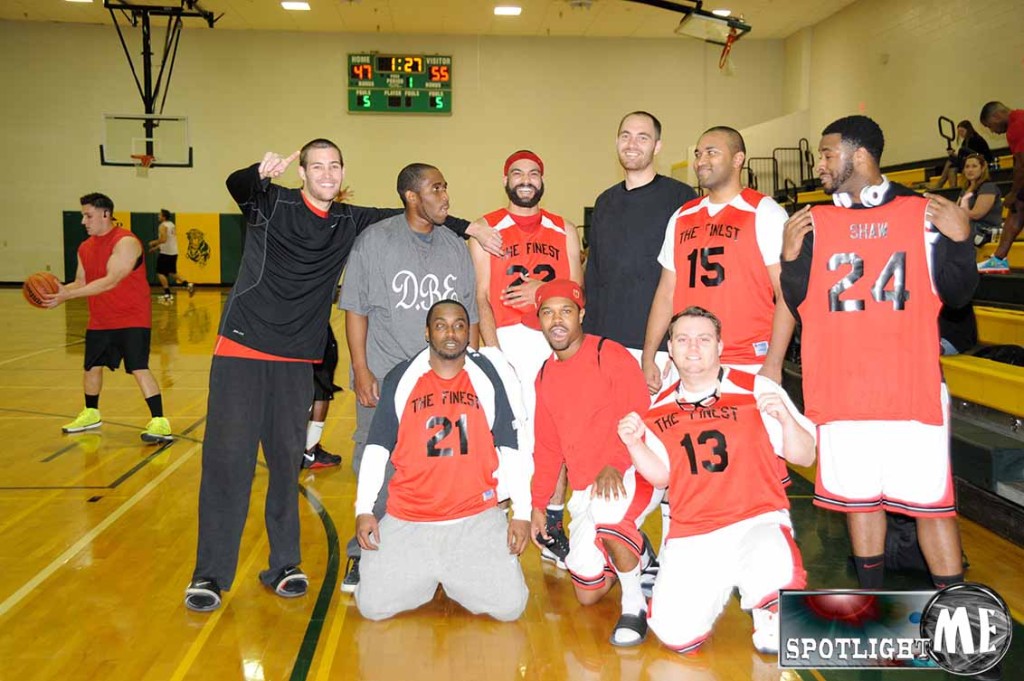 Maury “Super M@uryo” Osbourne is a former Marine, an Award Winning Film Producer, a fantastic photographer and a pretty nice guy.   He runs SpotlightME.tv and works relentlessly to be successful at his business.  You can reach him at 602.703.2638.

Posted in: Rise UP!